You are here: Home / Hacks, Tips, and Tutorials / How to Install and Set Up Octopi for Remote Raspberry Pi 3D Printer Control with Octoprint
FacebookTweetPin
Author: Chris Garrett 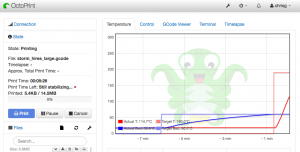 Octopi is a fantastic system for running your 3D printers remotely, using a Raspberry Pi, including built in webcam and time lapse features. Installing Octoprint need not be a chore on Mac or Windows. Follow this guide to see how quick and easy it can be to get up and running with your Octopi powered 3d printing!

What you need to run Octoprint

Octoprint can run on a variety of systems, but the most popular and convenient option for most people is to dedicate a Raspberry Pi to the task. Yes, there are people who have had more than one printer run off a single Raspberry Pi, but I wouldn’t recommend it, plus these little single board computers are not expensive!

You don’t need the latest and greatest Raspberry Pi model, the Raspberry Pi 3 Model B, but it does give you some convenience in that it comes with wifi and bluetooth on board so you don’t have to purchase a separate dongle, plus it has all the regular USB ports you will need if you want to plug in a wired keyboard and mouse, as well as the printer and USB camera, unlike the tiny Pi Zero W, which also has wifi on board, and has Bluetooth for wireless devices, but only has one USB OTB port, which will need an adapter, and maybe a USB hub to plug into your printer or a USB camera.

Personally, I run Octopi on several boxes, a variety of Pi 3 and Raspberry Pi 2. Each printer, apart from the Cube3 which is wireless already, has a dedicated Pi set up.

I get my Pi gear from Canakit who are also available on Amazon (aff link) and the Pi Hut. You might want to print my lego-compatible Raspberry Pi case 🙂

While you can install Octoprint manually, I recommend you get the Octopi disk image from octoprint.org. The disk image is much easier, all the hard work is done for you, including setting up video streaming, etc.

You will also need a camera if you want to remote control your printer with streaming video and time lapse recordings.

I use the official Pi camera, SainSmart clones, and also USB webcams. Logitech mostly work out of the box, others need some configuration. Easiest is the official camera, which is what I would recommend. I’ve even had the ultra-cheap Sony Playstation camera working.

I don’t trust SD cards off ebay etc, I buy from Amazon or locally. Bad SD cards are the most common cause of crashes and mid-print fails. You can get away with 4gb because the image is not massive, but I recommend 8gb or greater if you are going to be loading large models and storing long time lapse videos.

While I have often used a command-line tool for writing the Octopi image to my Raspberry Pi SD card, there is a much easier cross-platform, visual tool called Etcher. That takes a lot of the mistakes and confusion out of the equation. You will, of course, need an adapter or card reader if your computer does not have one built in.

Setting up Octoprint on your Pi, step by step

Then insert the Octopi SD into your Raspberry Pi and boot!

Once booted, you should be able to go to your Octoprint installation via octopi.local, but you will want to follow the video above for changing your login password and configuring your specific printer. Enjoy!