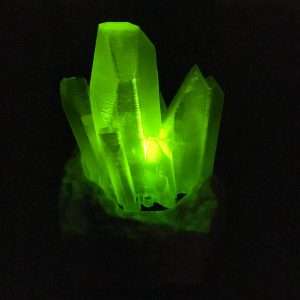 My daughter’s favourite TV show right now is Supergirl. She was feeling a bit grumpy so we joked that she had been exposed to Red Kryptonite. This inspired me to make her some, with a twist!

I am fortunate to have multiple printers so I could cut the time spent on this greatly by dividing up the print between my Wombot and my Wanhao.

Grab the files for yourself from here. 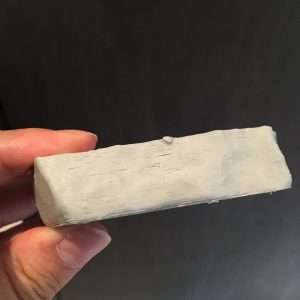 The “rock” base was printed on the Wombot in Aurorum grey PLA. Unfortunately the first attempt had poor layer adhesion, so I quit the print and bumped up the temperature. On the second attempt it was borked by the spool jamming, and jerking the hot end back. This caused a huge layer shift.

I paused the print, took note of where the Z height had gotten to, pushed the object that far lower in Simplify3D, output the gcode, and started the second half of the print again. 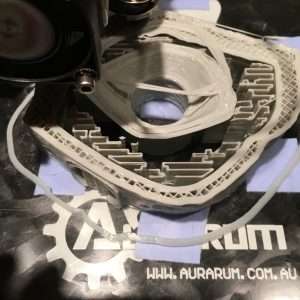 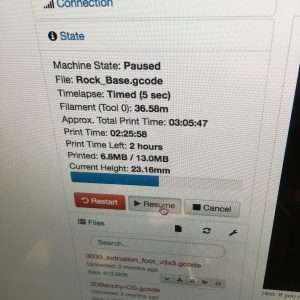 Thankfully the second half printed ok. This is where in my haste I caused myself a pretty nasty injury.

The Wombot side had taken so long I was at this point impatient to get the whole thing done. I wanted to surprise my daughter and cheer her up before she went to sleep, which clouded my judgement. In taking the print off the bed I gave myself a severe gash in my arm (luckily reaching but not cutting muscle or veins).

Please don’t do what I did.

6 stitches later I was back in action.

On my Wanhao I printed the crystal in eSun natural PLA. I sliced it in vase mode. The idea here was to give it optimum opacity, because I wanted to shine LEDs through. I think it came out pretty well. 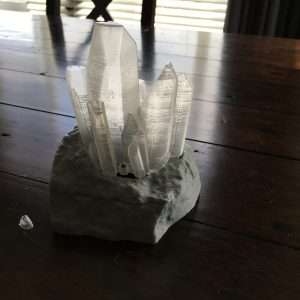 Next up was to cause the Kryptonite Glow.

The most basic version of the lighting is, of course, an LED and a battery.

Strictly speaking you should not connect a battery to an LED without a resistor, but as already established, I was in a rush. Batteries and LEDs are cheap anyway. 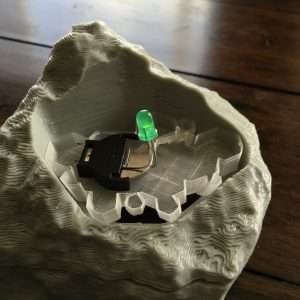 This gave the desired effect, and you could happily stop there, but I wanted more. I had in mind a gimmick.

What started all this was me joking about Red Kryptonite. Red Kryptonite makes Kryptonians go from mild mannered to angry. I wanted to make a kind of superhero mood ring.

All you need is an Arduino (I chose a Nano for this, because cheap and because it has a USB connection), and of course at least one LED. Because of the colour change requirement I could either go with just a red LED and a green LED, but I chose instead an RGB LED. This means I could expand it to be any colour (the comics have had a whole bunch of them over the years).

Wiring up the RGB LED is very simple. The first leg of the RGB LED is the red pin, second leg is the ground, then there is green and last is blue. These are attached to Arduino PWM pins, in my case 3, 5 and 6. PWM pins allow you to not just supply “on” or “off”, but vary the value from 0 to 255. This means we can mix and match the R, G and B values to create many different colours, and fade gradually.

What I wanted was a random chance of getting red, but most of the time to present green. Thankfully, there is an easy random function just waiting to be used.

Using the randomization code and the PWM signal, we can choose red or green, then fade the colour in and out in a kind of pulsing effect.

All that was left was to present it to my daughter. She found it funny but I am sure she would have liked it a heck of a lot more without a night time dash to the Urgent Care doctor 🙂