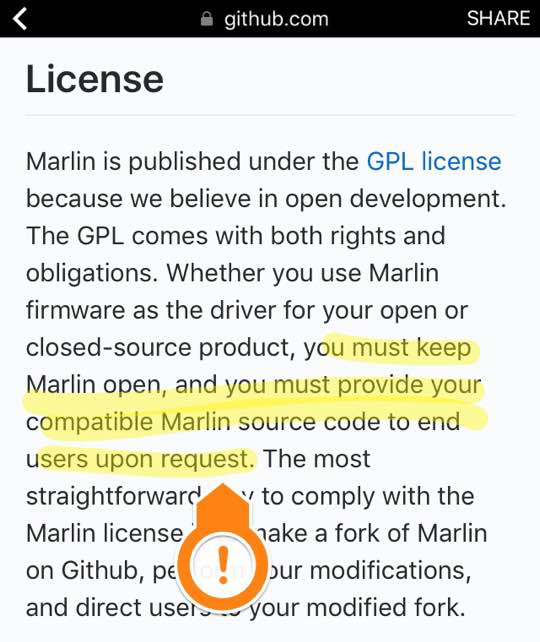 3D Printer manufacturers are in my (non-lawyer opinion) abusing open source, profiting from the developers and the community while not complying with their wishes and the license terms.

I like companies like Creality and Tevo (Update: Tevo have now released their files – yay!). The CR-10 and the Little Monster are two of my favourite printers. I do NOT like what they are doing to the open source developers who put so much effort in and contribute so much. They are not the only ones, just the ones who came to light in discussions recently.

There is no ambiguity – the software has a clear license, if these companies don’t want to comply then they should not use the software. Simple.

Thank you Tevo for doing the right thing

Releasing the compiled hex is NOT compliance, and these weaselly excuses are not any justification.

Companies like Tevo are profiting off the back off open source while neglecting their duties.

All they have to do is release the source to their modified versions of Marlin. Easy. Why all the obfuscation and excuses?

For good examples of open source usage, look at Prusa and Lulzbot. They do it right, and arguably have much more to gain from secrecy than what are essentially the budget Prusa i3 cloners like Tevo and Creality.

Added: If you want to support Marlin, Tom mentioned there is a Patreon!