Can I replace my iMac with a DIY PC?

You are here: Home / Makes, Tests, and Builds / Can I replace my iMac with a DIY PC?
FacebookTweetPin
Author: Chris Garrett

Can I replace my 2012 iMac with a DIY PC that is at least as powerful? Can I do it for less than a new iMac would cost me? Will it run MacOSX?

My 2012 iMac has started its journey to Silicon Heaven, and pretty soon it will be no more. I found a lot to like with this machine, but I have been growing increasingly frustrated with the lack of user-serviceability.

Can I replace it with a DIY PC that is at least as powerful? Can I do it for less than a new iMac would cost me?

That’s what I plan to find out, and I will document my progress 🙂

At the time of writing, the not-too fancy iMac 27″ looks like this.

Here is what I am replacing: 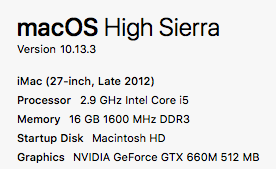 Selecting 16gb and SSD on the entry-level 27″ puts the price up by a lot. I am optimistic about this budget.

Now, of course, I would love this machine to be a “Hackintosh” (IE. install Macosx and have it work), but I am comfortable enough in Windows or Linux that it’s not a dealbreaker.

Right off the bat, I save money by not going all-in-one.

While I loved the aesthetics of the iMac, really it was also the cause of my frustration. I need to go modular so I can switch parts out.

Going DIY affords me maintainability, but it has to be said my Apple gear has always been long-lasting. Our 2006 white Macbook is still running fine and is still in use. Remains to be seen how the ROI works out over the lifetime of this new guy.

Matching the new mac pretty much, I over-paid, shopping on Amazon.ca, but I bought an i5-7600. In theory, this bad boy can do 4ghz.

I also grabbed 16gb (2x8GB) of DDR4 DRAM 3200MHz memory. Suppose this is better than what is listed on the mac, but in actual use who knows. Expensive stuff.

Interestingly, the included graphics should be out of box macosx compatible and exceed the performance of what I have on board now, even without adding a GPU. That said, I have a couple of GPUs coming, both Radeon and Nvidia, so I can experiment. GPUs are a lot of money right now due to crypto mining, VR/gaming and manufacture supply issues.

The PSU I bought is a touch over-powered at 750w, but that gives me the most upgrade potential. Likely I spent twice what I could have gotten away with.

Finally, one of the failure points is the hard drive. Currently, I have a hybrid 1tb, but for this new machine, I am going to go with Samsung 850 EVO 500GB 2.5″ SATA III Internal SSD for booting and apps. Data will be on externals I already rely on, and a secondary to be chosen later.

That’s the end of part 1

Now I wait and collect the parts as they arrive over the next few days!

As I said, I likely overpaid by going to Amazon.ca for everything, and by going into the city big box stores I could have had the stuff in my hands right there and then, but by going this route I at least make it more doable for anyone who wants to replicate my experiment (or mistakes!).

Loading the Arduino Bootloader on your Arduino 3D Printer Board (Unbricking Your RAMPs/3D Printer)
Next Post:Formlabs Form 2 First Look