The Problem with 3D Printing 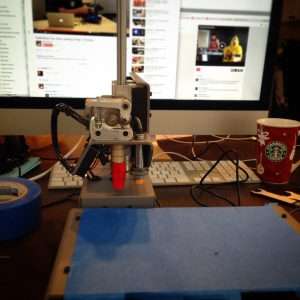 Lately there has been a rash of people on the 3D printing forums and Facebook groups complaining about their 3D printers in a way that makes me think their expectations are set too high.

I don’t blame them entirely, the manufacturers are often setting these expectations with their “it just works” sales copy.

How we think it will be

How it actually is

The first 3D printer I ever saw working was a $10,000 machine that took sheet rolls of plastic, rather than the filament spools we are familiar with. This was 2010 when the only person I knew who 3D printed at home was Ben Eadie, the owner of this fantastical machine that could make ideas physical.

Ben was, and is, a professional Engineering Technologist who uses CAD and prototypes as part of his work. Back then he was doing work with companies like Zero Motorcycles, or Alberta aerospace designing a turbofan jet, but now he is just as likely to be blowing up the Starship Enterprise (not even kidding).

But for regular folks, people without a professional prototyping need, $10k to throw down for a piece of equipment was just not going to happen. It took the RepRap movement to get up to steam, which it started doing around the same time. By the end of 2011 hundreds of RepRap printers were in the wild and it was starting to get widespread attention, due to designs such as the Prusa Mendel, and later the Prusa i3.

3D Printing for the Masses

These RepRap printers that brought 3D printing to the home hobbyist were every bit as homebrew as the homebrew computers from the 1970s and 1980s. Really, we are still in that phase. Yes, there are a lot of commercial 3D printing companies and hardware or software products, but there were tons of commercial computer companies fighting for air back then too.

We are very much still in the infancy of 3D printing. The hardware, software, and support for the activity is still at hobbyist and professional, rather than mainstream “appliance” territory.

The problem is, 3D printing is not sold that way.

“Just prints!” is still hype-marketing, not the day-to-day reality for most of us, even when you spend multiple thousands of dollars.

I’m not just talking about machines you would expect to do a lot of work on, the cheap kits and RepRaps you build from your own sourced parts, but even Ben’s $10k printer, or the expensive 3D systems monsters need care and maintenance. Even those that cost the low thousands can be a frustrating experience.

The price point had come down, but the user experience, and user justification, was still not mainstream.

It’s not just the frustrations holding 3d printer adoption back, it’s also the real or perceived dangers, especially for people with kids around.

These things run on electricity and generate heat, so of course there is some real danger there even with fully warrantied and QC’ed equipment. Occasionally a story will go around where someone might or might not have burned their house down due to a 3D printer, or at least how they were operating it.

I cut myself pretty nastily (don’t click that link if you are squeamish) when I was being impatient removing a stubborn print from the bed.

Then there are the “chemicals” – ABS fumes, or resin gloop that needs to be disposed of correctly. Both give people pause, and for good reason.

For most of us, 3D printing is either part of a hobby, or it is part of a job, but as mentioned in that last bullet, there is growing demand for people to work with the technologies.

We are still not at the place where we can predict “a 3D printer in every home”:

Could we get there? Sure!

I can foresee a time when you have a food-making machine in the kitchen where you give it your request and out pops piping hot and delicious food, made fresh right there. I’m also imagining a machine where you can say, select some new running shoes, and after some adjustments and customizations out pops the perfect pair in the perfect fit, with new designs downloaded from the internet.

But we are a long way off. Until then, things will get incrementally better.

What do you think?