Raspberry Pi remote access can be tricky. What can you do? How can you make it easy for you to remote access, but difficult for the bad guys?

Raspberry Pi remote access can be tricky. On the one hand you want to monitor your project while away from your network, but on the other hand you don’t want other people to find it easy to do the same. Hackers, for example.

By far the most popular question I got after I shared my Octopi tutorial was about how to gain remote access, from work or school.

What can you do? How can you make it easy for you, but difficult for bad guys?

There are three options that I have employed (even on the Pi Zero W!), each have pros and cons. Let’s take a look so you can choose the approach that will work best for you …

One thing to get straight right up front is I am not an IT security expert! If in doubt, get advice from an actual security advisor. Someone like SwiftOnSecurity, I don’t know, just not me. ¯\_(ツ)_/¯

It’s crazy how many people leave their Raspberry Pi with the default password of raspberry. Just don’t.

You don’t need to change the Root password, it’s usually disabled by default, just the Pi user’s password. Log in as Pi then enter the command

It will ask you for your existing password then the new one twice, and boom, password changed!

Next we can restrict what people are allowed to access from outside the Pi with a firewall.

This will download and install one called Uncomplicated Firewall.

Then you can make the default to deny all connections

Of course you will want to be able to SSH login from within your own network, for example:

For the sake of this tutorial you probably want to enable web access from the wider internet:

Of course the most seemingly obvious option is the most overlooked – if you are not using it shut it down!

My Octopi boxes are plugged into power strips that power the individual printers, and my Kodi boxes are plugged into the USB of the TVs they run off, turn the TV/power off and the Raspberry Pi box is also turned off. Of course that’s bad for the SD card, but I have backups, and no important files are kept on them, so no biggie.

Now, on to the good stuff 🙂

Before we get to actual remote access, let’s start with making the data accessible, rather than the computer …

If security is paramount, the most paranoid option is to not allow actual remote access at all, but instead have the Raspberry Pi reach out or sync.

For Octopi users, that usually starts with a plugin. One of the nicer Octoprint plugins for these purposes works with the Telegram chat system. It keeps you updated about print progress, and more.

You can find out about the plugin here, and install it right within Octoprint from the settings, plugins page.

You might have simpler needs, however. For old school notifications, I’m a big fan of Mailgun for sending email (you get a whole bunch of emails with a free account, and it has excellent deliverability).

For files, Dropbox is the way to go (especially as files are then accessible via phone/tablet, and you can hook up automation with IFTTT.com): git clone the repo. Get your API keys. Use the script (./dropbox_uploader.sh) to upload files. Boom.

I have more in depth examples and instructions of both the email and Dropbox/Webcam here at my Github repo.

If you have data you wish to push out, there are a lot of REST API options that don’t require you to host a database, and therefore you don’t have the risk of having to open it up to the outside world. One of the most simple to get working is https://data.sparkfun.com/: 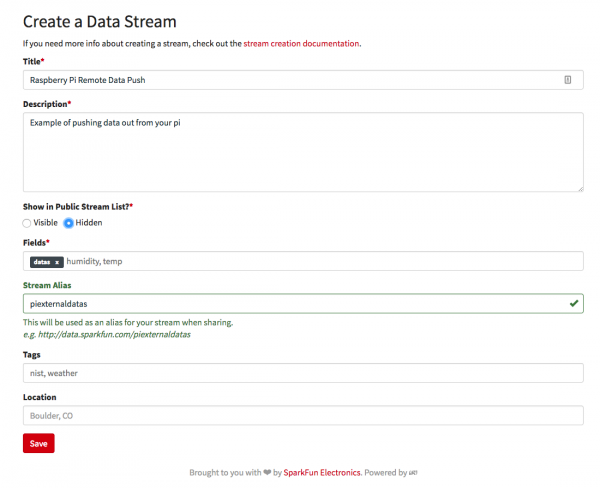 Here’s an example based on their Python docs:

Raspberry Pi users have created quite a lot of demand for services that make remote access easier and (hopefully) safer, plus, of course, there is a business demand for such solutions too.

Remote Desktop to Raspberry Pi from External Computers, Tablet or Phone, with VNC

One of the most famous remote access solutions is VNC, and they have an encrypted “cloud” authentication and connection option. Get a free VNC account here and the official viewer for your OS here. Of course, there will be folks who debate just how secure this is, but seems pretty robust at least compared to the other options we are looking at, so take a look.

VNC is a remote desktop tool, so if you are on a “lite” version of your Raspberry Pi OS, such as Raspbian Jesse Lite, you will need to install desktop, or probably easier, switch to the full image. Fortunately for me, on Octopi it’s as easy as:

(Make sure you have enough spare capacity on your SD card!)

Set up VNC on your Raspberry Pi using Rasp-Config, in the ‘Interfacing’ menu option.

You probably also will want a web browser on there, I like Epiphany (make sure you type exactly, there is a game called Epiphany you will download otherwise):

Once you have VNC and a web browser, of course, you can load Octoprint via localhost 🙂

Remote Control and Web Access on Your Raspberry Pi with PageKite

If you want anyone to access your Raspberry Pi, but don’t want to open up your network, there are a few options where you can have a proxy or relay service in the middle. It’s not totally unlike the first examples where the data was sent by the Pi rather than pulled by the client, in that the user doesn’t see your actual pi, but for the user it just looks like a public web server (or whatever).

PageKite makes it really easy, and offers a free month and data to try it out. You get a SOMETHING.pagekite.me URL, and all the traffic is passed back and forth to your pi through that. 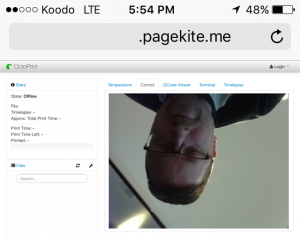 Afterwards you can run it on demand, for example to make your web server (or Octopi!) available, you would set up port 80:

Probably the most risky, but also the most common, way people provide external/remote access to their Raspberry Pi is “port-forwarding”. This is where the router is told to forward requests for, say, port 80, and direct them to a certain computer on the network.

One of the reasons this is a popular option is the high performance, but also depending on your router it might be real convenient too.

As with anything, there are multiple ways to achieve a result, and each have their pluses and minuses, be it security, difficulty, capability, or performance! Pick the option that works best for you, and please share your experiences in the Facebook Group 🙂

Meshmixer Tutorial – Using Meshmixer to Delete and Edit Parts of an Existing .STL
Next Post:How to Use Tinkercad to Make a Custom Gift – a Personalized 3D Printed Maze Puzzle